One of the most beautiful places I visited in Ecuador was Quilotoa.

A tiny village with a small population consisting mainly of farmers and a few people working in tourism. Quilotoa has a few B&B’s and a few little shops flogging alpaca gear but that’s about it!

Incredibly cold (at least it was in June when I visited) and at high high altitude (nearly 4000m above sea level in places) it is a destination only really for its spectacular crater lake. Many people combine visiting Quilotoa with a multi day hike dubbed the Quilotoa Loop around the neighbouring countryside and stop in a different village every night but I was running a little short on time so just visited Quilotoa itself.

Some friends we made just outside the village…

I took a bus from Quito to Latacunga and then changed for Quilotoa. Sources told me there are only 2 buses leaving for Quilotoa a day but I found this to be inaccurate. Many buses pass in that direction and will willingly drop you off just outside the town! After a bumpy ride winding along mountain roads for a few hours we arrived in the tiny village. Make sure to pay the visiting fee – it’s only a small sum!

The first thing you notice is the thin-ness of the air here – it is hard to breathe because of the altitude – and the cold! But, you quickly get used to it. Make sure you find a hostel that will include breakfast and dinner at least (since there are no restaurants) and check that your room has plenty of blankets and ideally a fire before committing! You do not want to freeze!

So, to the main reason for visiting – the lake. The crater lake is breathtakingly beautiful. Existing for around 800 years since the volcano’s collapse after a massive eruption,the lake itself measures about 3km across with a loop around its rim about 10km long. This volcano is the westernmost of all the volcanoes in the Ecuadorian Andes.

If you have a tent, and it’s not the dead of winter, it would be nice to camp on the shores of the lake (about a 1-2hr walk back out up a windy path) and also go kayaking or swimming in the lake itself. Since it was pretty cold when I went I plumped for walking around the crater edge instead and staying in the village.

This walk should take about 4-5hrs but it depends on how you’re feeling at altitude and other factors like the wind! It is not an easy hike – the path itself is often loose sand and scree as well as having many steep ups and downs. The day I attempted it the wind was so strong it nearly blew us off the side of the path (a narrow rocky one with sheer drops on both sides at certain points) so I ended up walking partway and then turning back. Because the walk is a circuit and you can see the whole of the lake from all points, turning back wasn’t as devastating as it would have been otherwise. I still spent plenty of time staring into its turquoise depths and looking out at the chequered countryside dotted with alpacas and sheep!

I’ll let the photos do some talking!

As you can see, it is quite a climb! 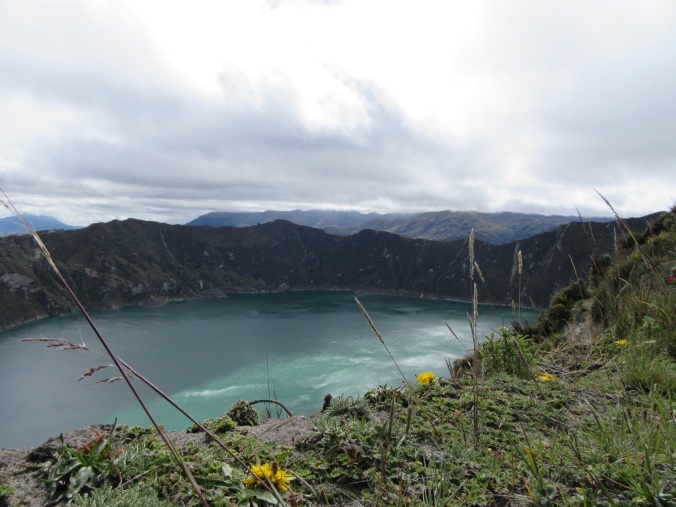 Walking The Colca Canyon Without A Guide