Fès or Fez is the second largest city in Morocco and was the capital city from the 13th/14th century until 1912 when Rabat took over the title. I’ve put together a list of 5 things that make Fes fabulous (and better than Marrakesh) in my opinion. For more ideas, and more of the useful but boring details, I often find Lonely Planet to be a good resource. 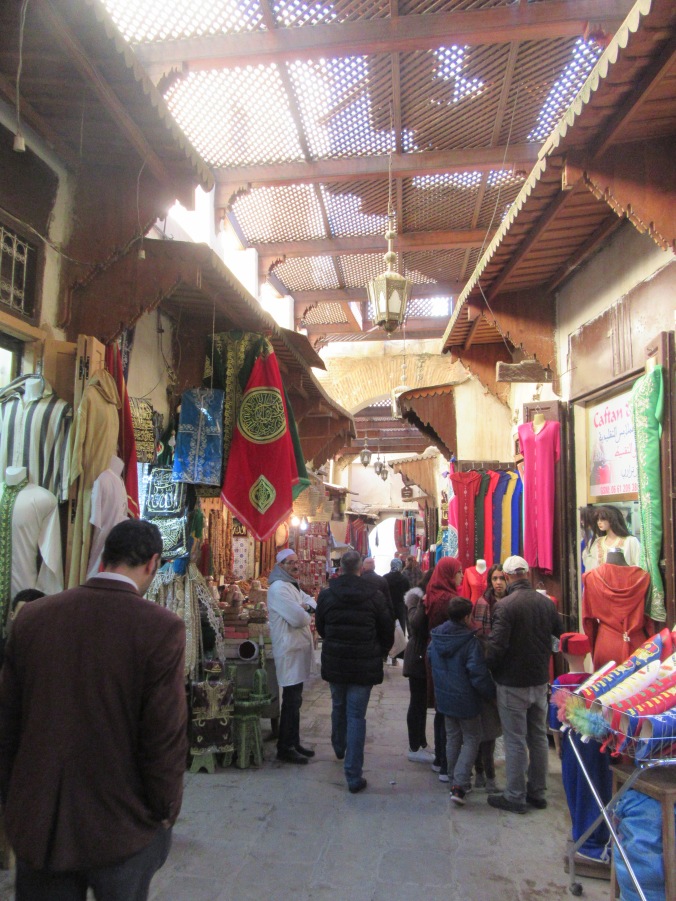 One of the streets in the Medina. UNESCO has helped preserve the latticed wood roofs along with many other things.

The Medina (or old souk) in Fes is enormous. It is a UNESCO world heritage site and has been renovated greatly in recent years. It houses some 60,000+ people and is comprised of more than 9000 small and winding streets where people live and work. The Medina houses all sorts from beautiful lamp shops and jewellery stores to traditional Berber rug makers and designers, many traditional pastries and a huge array of olives and other raw ingredients. 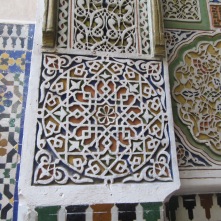 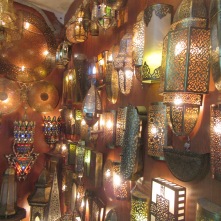 Some places of particular note are:

Chaouwara Tanneries – a large cooperative tannery where leather is washed, coloured and turned into shoes, bags and jackets. This incredible cooperative has every part of the process down – from washing the skins all the way to selling the final products. You can pop up to the roof terraces surrounding the the tannery to look down and see the vats of coloured liquid slowly dying your future jacket. Understandably the place can get a bit smelly (not least because of the pigeon poo used in part of the process) so you’d be well advised to take some fresh mint up with you to guard your nose! 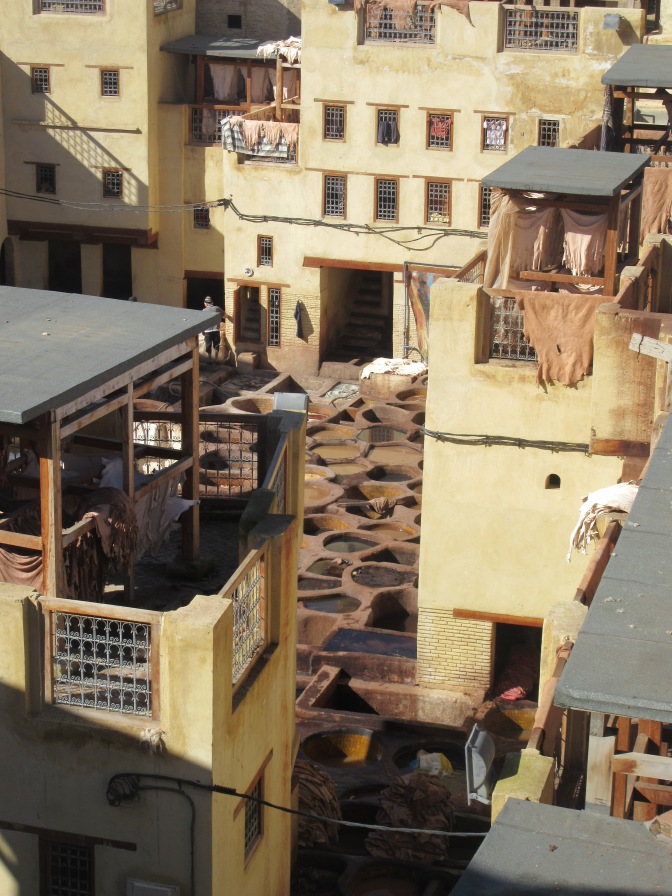 The Al Karaouine Mosque – this stunning Mosque is only accessible to muslims but even if you can’t go inside it’s still an interesting and beautiful place to visit. This is the oldest university in the world and was founded by a woman. Her name was Fatima and she was known as “Ummou Al Banin” which means “Mother of Sons”. She founded the University with her inheritance and it was donated for the use of the community. Founded in 859AD Al Karaouine has always been both a degree-granting university and a Mosque – now it only teaches Sharia Law but in the past it taught a variety of subjects which are now taught elsewhere around Fes. You’d think the world could have noted the fact that the first university was founded by a woman before barring women from getting a degree for a good few centuries!

If, like me, Fes is your first stop in Morocco, you’ll be dazzled by the many delicious dishes to try. My best advice is to eat local – look for places with more locals than tourists and surreptitiously peer at what they’re eating before ordering. Make sure to learn a few words in Arabic and some French and you’ll get along fine. Here are a few tips for getting by in Morocco!

Also, if you pass a street vendor with something that looks tasty – go for it! I find travellers are often a bit nervous of eating food from stalls but don’t be – if locals are buying there it’ll most likely be fine! The most authentic food you find is usually in some very basic or even sketchy looking venues.

Some of my particular favourites of Moroccan cuisine are Chicken Pastila (a very strange but delicious pastry filled with chicken and herbs and topped with icing sugar and cinnamon) and Beef and Prune Tagine. Since Morocco has a lot of French influence you’ll find an abundance of pastries piled up in shop windows or on carts being rolled around the Medina. Many will be traditional French patisserie and cookies that look like the kind you’d make at home. Then you have the honeyed nut-filled bites that are very Moroccan. Make up a tasting box and snack away… 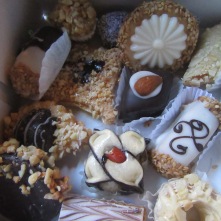 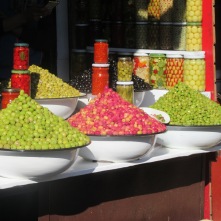 You’ll inevitably need to step away from the hustle and bustle of the Medina for a moment at some point on your trip. Morocco can be a very overwhelming place to visit, especially solo! I found this park by accident and greatly enjoyed a couple of afternoons sitting in the beautifully manicured Andalusian-style city garden. The garden was created in the 18th Century by Sultan Moulay Abdellah and let me tell you, he did a good job!

Filled with families strolling the orange-tree lined paths and sitting around the stunning display of central fountains, the garden is a lovely place to sit and enjoy some of the Moroccan and French patisserie you’ve just bought from the Medina.

The walls of the garden are typical of the walls you’ll find around Fes – particularly the ramparts which divide off the Medina from the rest of the city. These ramparts were built, or were at least started around the 11th Century and are impressive still to this day! An enjoyable wander will take you along some of these walls and through some very impressive archways up to the Merenid Tombs and back to Bab Bou Jeloud (the blue gate of the Medina). 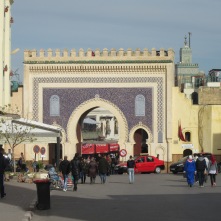 4. Have a Traditional Hammam

For the shy amongst you this may be a little uncomfortable but embracing it will lead to glowing skin and you will soon forget standing almost naked in a room full of strangers! Hammams are an important part of Moroccan culture – most people go regularly at least once a week to have a good scrub down and a gossip with their friends and families. Apparently it is even used by mothers to eye-up potential wives for their sons since this may be the only place where the girls are not covered up.

I believe that the tradition began for a couple of reasons. Part of the reason is religious. For Muslims it is very important to be properly clean – some Mosques have their own Hammam and washrooms in them like the Hassan II Mosque in Casablanca. The other reason is due to the lack of availability of proper bathrooms in the average household. Not everyone could afford decent bathing facilities within their houses so public baths (Hammams) became the norm.

So, onwards to the nitty gritty. A Hammam experience can cost you anything from about 10Dh right up to 500Dh or so depending on whether you go to a local Hammam, do your own washing and have any extras like a massage. As a tourist you’re likely to spend around 150Dh for a good over-view of the Hammam experience. Most Hammams, like Turkish Baths, have rooms and pools of different temperatures to wash yourself and relax beside. The difference is in the actual washing.

So, you’ll strip off right down to just your underwear (pants only) and head in to the bathing areas. Usually there are different times of day for women and men to visit the Hammam – it is strictly forbidden for men and women to share the same space here. The norm is to use a special black soap and a very vicious scrubber to completely clean you – you’ll literally have rolls of dry skin coming off you along with any grime from the day. All the locals use these terrifying scrubbers on one another but, if you don’t want to end up without skin, I’d recommend getting a professional to do the honours rather than trying to do it yourself. You’ll have a lady (or a man if you’re a man) indicate where she wants you and you’ll be asked to roll over or move around so she can scrub and wash you fully. It can be a little uncomfortable – the water is pretty hot and the scrubbers are fairly rough but the end result is worth it. For your 150Dh Hammam you’ll most likely be given a massage too as the process continues. Fancy tourist Hammams will offer all sorts of beauty treatments too!

Since I’m British I was too paralysed with awkwardness to take any photos of my Hammam experience! But I would definitely recommend it! Just ask around for Hammam recommendations.

Important to Remember: take a towel and spare underwear for after. Also tip!

5. Go on a Day Trip to Visit Meknes, Moulay Idriss and Volubilis 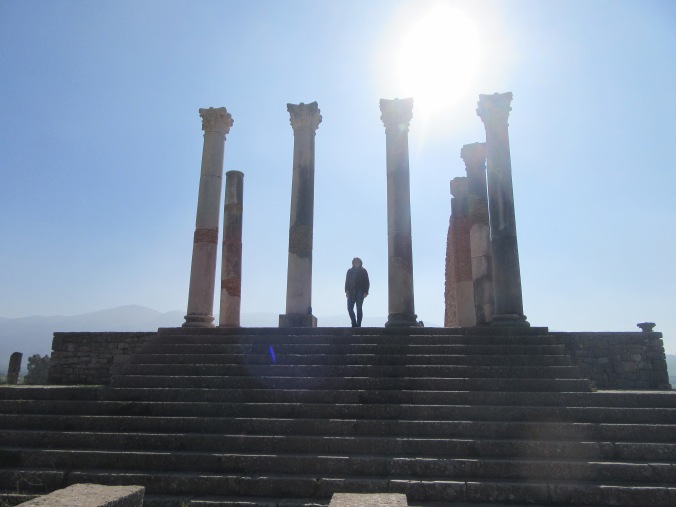 Many different columns can be found at Volubilis. If you wait long enough you might get a photo without the other tourists getting in the way!

I went to Meknes, Moulay Idriss and the architectural ruins of Volubilis on a daytrip from Fes. A private car with driver should cost no more than 200 Dirham per person (up to 6 people) for a full day excursion.

Meknes is Morocco’s third imperial city and is situated 60km or so outside Fes. It was developed under the reign of Sultan Moulay Ismaïl and has a lot of similar features to Fes but on a smaller scale. It’s ramparts and old buildings are beautiful and its Medina is full of aesthetically appealing mounds of spices and a ridiculous quantity of delicious local patisserie!

We also visited the Royal Stables which were a real wow! The Sultan was a big fan of horses – to the extent that his stables housed 12,000 horses (each of which had its own groom and slave). The building, although now in ruins, is a stunning piece of architecture with incredibly high domed ceilings and archways between rooms. Well worth a visit! 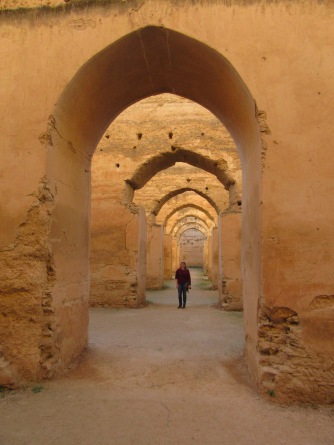 On our trip we drove through some of the stunning countryside to a town called Moulay Idriss. This is the birthplace of Moroccan Islam. Moulay Idriss I first arrived in this small town in 789AD and brought with him a new religion. It is now a holy place which houses the mausoleum for this leader, Moulay Idriss I.

If you like ancient ruins you’ll certainly like Volubilis – arguably the jewel of Roman architecture found in Morocco. This ancient city was declared a UNESCO World Heritage Site in 1997. It covers about 42km and was the ancient capital of the Kingdom of  Mauritania. It doesn’t disappoint in terms of old mosaic floors and crumbling columns – as well as some pretty amazing views. Hire a guide if you need the specifics of the history – they only cost about 100Dh at the entrance.

Visiting these places can easily be added to a road trip through the Atlas Mountains down to the Sahara Desert and back again. Keep an eye out for my upcoming post on that trip!

I hope you enjoy these Five Fabulous Things To Do in Fes! If you have any suggestions, updates or think I have forgotten something important please have your say in the comments!

2 thoughts on “Five Fabulous Things To Do in Fes”