“What are the Proms?” I hear you ask! Well, the BBC Proms is a concert series which runs for 8 weeks every summer in London’s famous Albert Hall. There are different performances on every single day from solo performances like Yo Yo Ma playing Bach’s Six Cello Suites (which I saw in 2015) to full symphony orchestra performances and musicals. The music varies from the truly classical to swing to soul to Rodgers and Hammerstein and the classical spans decades as well as traversing the globe pretty thoroughly. Sounds just the ticket? Read on to find out how to enjoy classical music cheaply in the Royal Albert Hall. 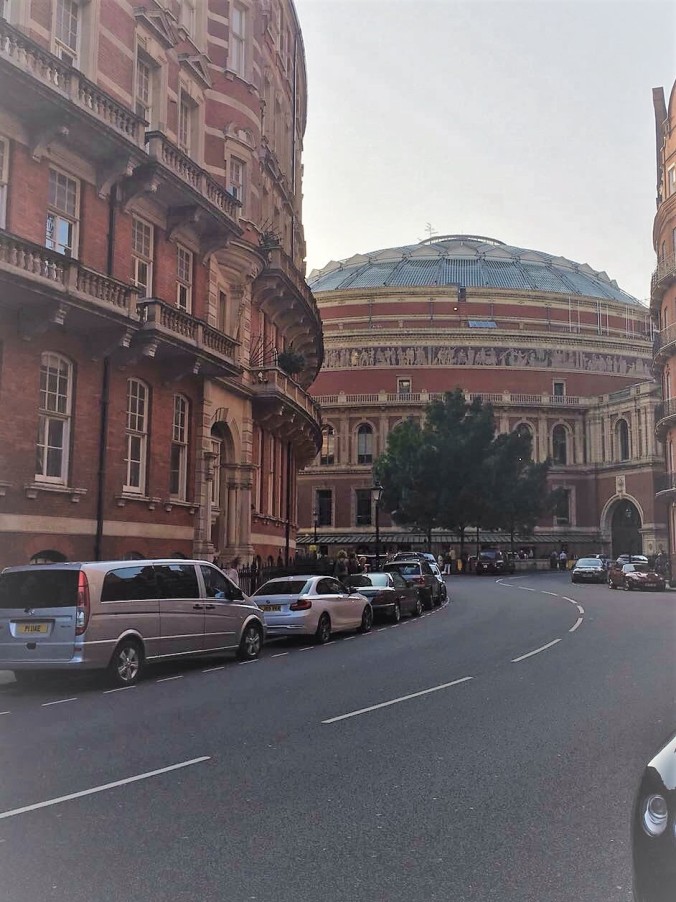 The Royal Albert Hall – famous host to the BBC Proms

The word Prom comes from Promenade and refers to walking or promenading around. Back in the mid 18th Century promenades were regular affairs held in pleasure gardens and parks for the rich and famous to wander around and enjoy the music as well as the company. Although the Proms now take place (almost) exclusively inside the Albert Hall, the name still carries some weight. One of the options for watching the concerts is to buy standing tickets and “Prom” in the Gallery or the Arena. To some, it is the only way to Prom properly!

Classical music tends to be considered a luxury as well as something inaccessible to most people but the Proms really open up that world for everyone. If you aren’t sure if you like orchestral music, come to a £6 Prom and find out. You can also attend Proms in The Park which does exactly what it says on the tin. You watch the Last Night of The Proms on a big screen in Hyde Park with booze and picnics (and, let’s face it, UMBRELLAS) – lovely!

This was a busy Prom – the standing tickets must have been completely sold out!

London is a very expensive city and concerts and plays are especially beyond the reach of most as a general rule. I usually treat concerts like a special present to myself. But, this sort of thing is so much a part of the history and uniqueness of London that it is only right that we make the most of it! Follow my instructions for Getting Proms Tickets below!

How To Get Prom Tickets

Serious Prom lovers and indeed budget-conscious Londoners and visitors alike should know that standing tickets (or Promming tickets) are available for low low prices – £6 in person and £7.12 (as of 2017) online on the day though these are very limited. If you are visiting London you may well have the chance to queue outside the Albert Hall for the £6 tickets on the day and you’ll have a very good chance of getting standing room if you get there early enough!

Totally worth it to see mind bending modern music and talent that you’d normally expect to pay an enormous amount to see. If you know you’ll be in London for the duration you may want to look into getting a season pass or various weekend pass options.

It’s not just standing though, at the quieter concerts plenty of people lie or sit on the floor. Some people bring cushions and lean on their friends. I’m sure I saw someone with a camping stool at some point. What you do depends a lot on the number of people there that day, whether you want to actually see the musicians or if you’re happy just to listen, and how your feet and back will hold up standing for over an hour at a time!

If standing/lolling isn’t your cup of tea (how very British of me!) you can also buy seats online or by calling the box office. This does of course require a little more planning and you may wish to buy them quite far in advance to get the best seats for you.

My personal recommendation for budget/visibility is the Rausing Circle. The Rausing Circle is pretty high up and far back so you won’t see the expressions on the musicians faces clearly. Some may say this is a blessing for some instruments – Tuba, I’m looking at you! What you will get though is a lovely view of the overall room which is a treat in itself and, if you pick a central seat you’ll get a lovely view of the whole stage.

Another good option is siting in the Choir. These seats tend to be a bit on the cheaper side too as you are sitting behind the orchestra. The plus side is that you are very much in the action and you’ll get a great view of the conductor and their animated conducting which is always a total mystery to the rest of the room who only ever see enthusiastic arm waving and bottom wiggling! Of course the downside is that the rest of the musicians have their backs to you. However, my view is that you listen to music rather than watch it so it really doesn’t matter where you sit.

Every ticket I bought with a seat cost less than £20. Boom! Still a very cheap concert!

TLDR: Queue every day in person or online for cheap Standing “Promming” tickets. Buy online in advance for cheap seats.

TOP TIP: If you’re a person who suffers with long legs try and get seats on an isle or the very back row of the Rausing circle which seems to have a little more room.

How Should I Plan My Promming?

Very few people have the time, money or energy to Prom every night – even with £6 tickets! Luckily you can plot your plan of attack in the run up to the Proms by saving your choices on the BBC Proms website! Like a shopping trolley for Classical music you say? Quite!

What I would recommend is mixing it up – choosing the old favourites is always a temptation – “I’ve heard of that one” or “At least I know one of the pieces” are both thoughts I had in picking which concerts I would attend. However, when the prices are as cheap as they are, sometimes you should just wing it. Pick a date that suits and hope you like the music. Choose something that sounds waaay out of your comfort zone. You will not regret it! There is so much to choose from you should certainly try a few new things!

Do not be afraid to Prom alone. I went to several Proms alone this year and found that people who Prom are very helpful and lovely about reminding you what you are listening to and good for a chat in the interval.

Travel To The Royal Albert Hall

The closest tube stations are South Kensington and High Street Kensington and a walk to the hall from either takes you past some beautiful buildings! Lovely! Plenty of buses can dispatch you out across London in a jiffy.

If you have any tips for How To Prom well or advice on how to go to Classical concerts around the world cheaply please share in the comments!